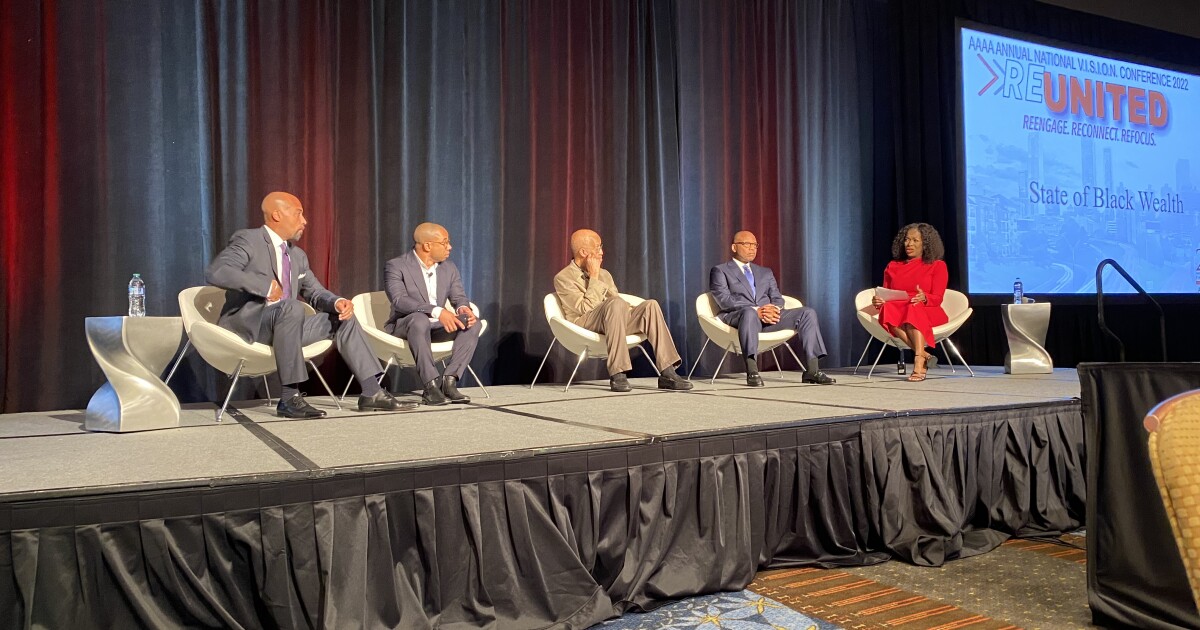 How Wealth Conversations Can Help Close the Race Gap

Financial advisors can help gradually close the nation’s racial wealth gap by changing the conversations about money between Black Americans and other minorities.

That was the main conclusion of a panel of five black experts speaking Tuesday at the annual Vision conference hosted by the Association of African American Financial Advisors, dubbed “Quad-A.” Panelists including an advisor, bank CEO, educator, insurance executive and financial journalist spoke to hundreds of attendees in a session titled “The State of Black Wealth”. The nuanced discussion brought the conversation back to the level of the advisor-client relationship.

Despite some successes, the current net worth of Blacks and Hispanics relative to that of White Americans remains extremely low. An average household among these groups has about half the income of a white household and about 15% to 20% of the net wealth, according to the Federal Reserve, which noted last year that the disparity “has widened significantly over the past few decades.” Well-documented systemic racism involving housing and mortgages played a very big role in creating this gap. Panelists focused on a different angle of attack: how individuals can gradually narrow the gap over time.

When Quad-A founder LeCount Davis started his practice in 1970, his clients were relatively wealthy but “they spent more than they earned,” he said. “I’m not thrilled that anyone is making a lot more money than me, me or my clients,” he added. “You have to improve your situation regularly.”

For Davis, that means saving and investing as part of a financial plan with an emphasis on educating your downline about money. For many Americans, however, talking about money is difficult given the trauma and other psychological factors surrounding wealth. Especially for many black Americans, the subject of money is often taboo, according to Kenneth Kelly, CEO of Detroit-based First Independence Bank.

Kelly, who is also the author of a book on estate planning, cited examples of long-running disputes over generational wealth following the deaths of musicians James Brown and Prince and the filmmaker John Singleton.

“Even when talking with your kids, tell them about your assets and liabilities that match your net worth,” Kelly said. “Until we start having this conversation and make it part of our everyday language, we’re not going to change the behaviors that are going to get to the point of closing this gap.”

Other late celebrities offer contrasting stories that can help advisers and other financial professionals communicate this message, said Eugene Mitchell. He wrote a book about the racial wealth gap after nearly two decades as an African-American market manager for New York Life Insurance. Many people know that Nipsey Hussle achieved wealth as a rapper and entrepreneur before he was murdered in Los Angeles in 2019. What they probably don’t know is that he took out an insurance policy -million-dollar life that provided continued wealth for his family. after his death, Mitchell said.

“His wife just bought a $2 million house in Los Angeles, his business got sued, so what he did is a pattern we can follow,” he said. “We also want to highlight these successes.”

Groups such as Quad-A have the potential to change typical narratives about wealth by advocating for financial literacy, according to Courtney Gray, founder of the nonprofit internship organization Historically Black Colleges and University. HBCU first. As a group of advisors sponsored by major wealth managers including Morgan Stanley, JP Morgan Chase, Bank of America’s Merrill and LPL Financial, Quad-A can tap into high-octane lobbying to support literacy courses financial requirements for young people, Gray said.

Counselors can encourage this learning by talking with clients about the meaning of wealth and what it might mean for families in everyday life. The panel moderator, former Bloomberg Radio and TV correspondent Renita Youngasked each of the speakers to define “wealth” in the style of their Instagram Live show “#YourMoneyStory” before providing their own response.

Over time, these talks about money and wealth could lead to more black Americans building wealth at the level of Warren Buffett and Bill Gates, according to Davis. The organization’s founder was applauded by the roomful of black advisers at the Hyatt Regency in downtown Atlanta as he told the story of one of his many media appearances.

“I remember being on a show when someone said, ‘Well, how many black billionaires do you have in this country? ‘” Davis said. “I said, ‘It doesn’t make any difference to me, because if you can name them, that means you don’t have enough. “”